Over the many years in the industry, we have gained a great deal of experience and equipped a wide variety of ships with our automation systems and components. Ships, which operate in most different places in the world and fulfil the most different tasks.

In addition to numerous ferries, tugs and cargo ships, a few more quite unusual vessels have been among them lately. These range from research vessels, river icebreakers and dredger ships to various patrol boats. We can now extend this list by a 114.5-metre long, four-masted barque, on which we will install our remote control system NORISTAR 4 this year.

The ship is the famous Kruzenshtern, which was built in 1926 in today's Bremerhaven under the name Padua. In 1946, the ship was surrendered to Russia and received its present name there. As the only ship of the reputable Flying-P-Liners of the shipping company F. Laeisz, it is still at sea today. The ship serves the Russian Ministry of Fisheries as a sailing training vessel for the training of the junior staff. Beyond that, the Kruzenshtern participates in regattas all over the world.

If you would like to see the ship in action, you can do so at the harbour birthday party in Hamburg this year. As one of the highlights, the ship will be on display at the entry and exit parade, as well as during the whole time of the festival as part of the “Open Ship" to be visited. 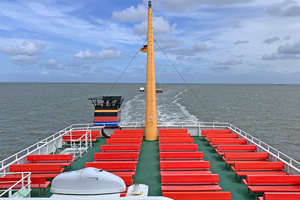